Here on this page you will find our F.A.Q (Frequently Asked Questions) that get asked. We find these are the most common questions asked.

How does the BPU™ system reduce KW and KWH?

Is the BPU™ system simply a power factor correction system?

What savings will the BPU™ system provide? How can you distribute the BPU™ reduction of 11% in the kWh for the following at distribution level/service mains (How much saving is associated with harmonics, phase balancing, voltage optimization, power factor correction, etc.)?

The main point is that the BPU™ auto-senses what is occurring in the building and adjusts the magnetic reactor to respond in a millisecond per cycle to the facility conditions. All of the conditions noted above created inefficiency in delivering good power quality and the BPU™ is able to sense and adjust to varying power quality.

If we have more than one transformer / main panel board, how many BPU™ system do we need?

What is the effect of BPU™ system on DC loads?

The BPU™ will clean up the noise from the rectifier/reactor creating the DC.

Does the BPU™ system consume power?

No and we have proven it in various ways. The BPU™s magnetic core acts more like a small generator.

Can the BPU™ system be used for power generating station like Independent power plants?

Limited to 480 volt circuits at this point although research has been done higher voltage circuits up to 1,400V.

Designing of BPU™ system would base on measured load or maximum load of transformer?

The first step in each case is to determine which BPU™ model(s) are needed for the application based on the parameters. A BPU™ must be installed on each transformer/panel. However, the total situation needs to be assessed so that the facility is not provided with more than is needed. This should not affect the overall cost of the installation.

The first step above is followed without consideration for the coupler being present.

The BPU™ is not designed to step down voltage or step up voltage, but it will balance the phases.

What is the voltage range for each BPU™ that it can stabilize?

In an unbalanced situation, Basic Power has seen the BPU™ balance up to 20 volts.

What type of harmonics can a BPU™ system filter?

Voltage and current on the secondary side.

Yes, the BPU™ will clean up the harmonics on the secondary side.

What are the basic principles adopted to filter/eliminate harmonics and type of filter used in BPU™ system?

The BPU™ removes the odd and even harmonics around 300 and moves some harmonics up to 3,000. Mitigating the lower harmonics and maintaining higher harmonics is beneficial for the BPU™.

If anything happens to the BPU™ system will we lose operation time?

Sometimes a Client doesn’t have any data for size Cables and Transformer, or nameplate data. What are the minimum essential information required to proposed them a comprehensive solution?

The key parameters necessary to carry on the conversation are voltage, kWh/month, range of running/max amps, and power factor. We can assess fairly well with this limited data.

How will we take into account the winter load in the summer season, with our summer load in winter season, for proper designing and load calculation for BPU™ system?

Of course this will occur and typically the BPU™ ranges provided will handle these situations. There are other ways to address fluctuations which involves installing multiple, smaller BPU™s to gain the most effective approach. That is why having access to an electrician or engineer who understands power is very important.

How does the BPU™ system reduce KW and KWH?

The BPU™ improves the poor power quality caused by harmonic distortion, unbalanced phases, surges, and poor power factor. Our Magtori-2 Power Quality Transformers sense and then capture any electrical energy that has been distorted from the fundamental sinusoidal wave that represents usable electrical power. This recycled electrical energy is then stored and as the BPU™ is designed to be the least resistive circuit your equipment will draw from the BPU™ first and then from the utility meter thereby reducing the kilowatts consumed. The BPU™ is also designed to clip demand spikes and therefore lower the maximum peak at which the utility charges you. Other functions of the BPU™ also result in lower kWh consumption such as phase balancing.

What proportion of the 11% kWh savings can be attributed to the various power quality solutions within the BPU™ technology? 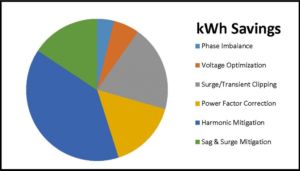 Does the BPU™ system consume power?

Our units do represent an electrical load but as the BPU™s magnetic core acts like a generator that load is not registered at the utility meter or on a power quality analyzer. We love showing this surprising effect during our installation.

Can the BPU™ system specifically design for particular Motor or compressor as a inverter does, and actively reduce Current?

The BPU™ has impacted imbalances up to 20%.

Voltage Harmonics VTHD slandered. How much voltage harmonics are allowed if our client is having 3% VTHD how much will the BPU™ system further reduce it?

The BPU™ typically reduces current harmonics to less than 3%.

What will be the standard for voltage unbalance at main LT?

The BPU™ typically reduces voltages imbalances to within 1%.